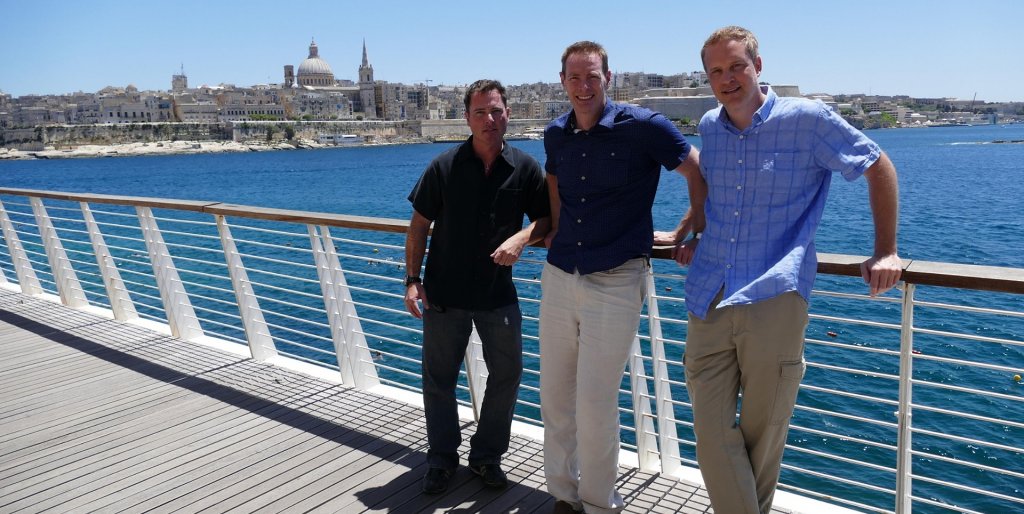 It’s possible that more people in America have heard of bestselling authors Chris Kuzneski, Boyd Morrison and Graham Brown, than have ever heard of Malta.

But all that might be about to change now after the tiny Mediterranean archipelago successfully spent the last week wooing the three hugely popular thriller writers, in what must rank as one of the most unusual and canny tourist initiatives ever.

The authors, who together sell millions of books, came to Malta at the invitation of the Malta Tourism Authority, which is now hoping that they will return home and help promote the Maltese islands in the as-yet-untapped US market by using the archipelago as a backdrop in their new thrillers.

“I’ve been writing over a decade now and I can’t remember any of our writing friends ever mentioning being a part of something like this,” says Kuzneski, whose website claims, perhaps with tongue in cheek,that his books have sold a billion copies in some 25 different languages. (“Give or take a billion,” he jokes.)

It all began with a fan letter from Malta, explains Kuzneski, after he mentioned the island in his first book, Sign of the Cross. “This was my first international release and how a copy of my book had ended up in the middle of the Mediterranean blew my mind, because I’d worked so long and so hard, and finally to have my book at the other side of the world just amazed me,” he says.

In what became as he calls it, “an in-joke”, Kuzneski then mentioned Malta in all his subsequent books. Eventually the author received not just more letters from an increasing fanbase in Malta, but also an invitation from the Malta Tourism Authority asking him if he would like to come over and finally visit the place.

“They said we think it would be a great way to expose the country in America, and as soon as they said that, I then automatically thought well if one voice is good, then three voices would be even better,” says Kuzneski, who is friends with both Morrison and Brown.

Their week-long tour of Malta ended on Sunday, and included great scenic locations, a visit to the war museum, and even ancient torture chambers – all good grist for the mill, one imagines, if you’re a thriller writer. All three authors say they have been inspired by the visit.

“It’s been an eye-opener. You just can’t imagine a country that’s an island in the middle of the Mediterranean, that could have so much history, so many different cultures, so much to offer,” says Graham Brown, whose book The Storm, co-written with Clive Cussler, debuted at the top of the New York Times bestselling list in 2012.

“You can’t look at the fortifications [that are] guarding the harbour without thinking of a time when security and freedom literally depended on physical walls,” he adds. “It’s very easy to think of that Fortress Malta continuing in the modern world, but in a more hidden way. There’s still a sense that Malta’s a kind of bulwark, and I have several ideas that just spring right from that.”

Morrison, whose latest book Piranha - also co-written with Cussler – debuted at No 3 on the New York Times bestseller list, also vowed to use Malta in his future books, citing the country’s “breadth of history … from Napoleon to the Ottomans to the Knight’s Templar and world war two”.

Malta’s tourist board will also be happy by the authors’ vow to return. “We’ll probably bring more people actually,” added Brown. “We think we could probably set up a writers conference here and bring 30, 40 people in and they won’t want to leave either, just like we don’t.”