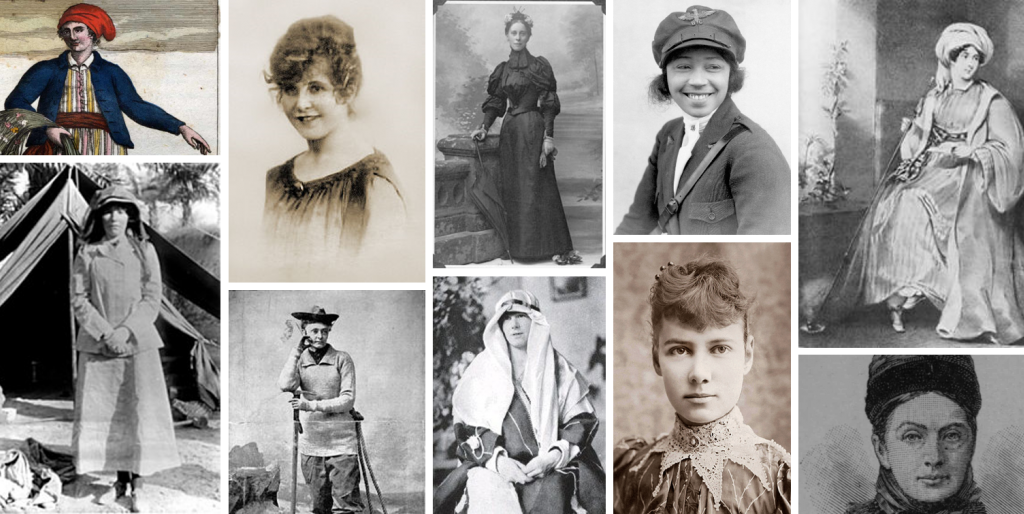 On International Women's Day, Malta Uncut chooses to pay tribute to female trail blazing travellers, who are not as celebrated as they should be. In the past, many women had to go through great lengths to be able to travel as it was something that only men did. Yet these women defied gender norms: they believed that they could, and they did. They did even though it was proibited; they did even though they were told they would never manage; they did...whatever it took. Here are 10 women, (in chronological order), who we thought should make it to the list - whose thirst for travel and adventure opened doors for many who came after.

2. Lady Hester Stanhope (1776 - 1839) - A British aristocrat aka The Queen of the Desert, she abandoned her comforts and luxuries to explore the Middle East. She was the first European woman to cross the Syrian desert an the first modern excavator of the Holy Land, paving the way to tourism to the site.

3. Isabella Bird (1831 - 1904) -  She was unwell, but this didn't stop this woman who was a photographer, naturalist and writer. Isabella, who was English, started travelling at 41 and kept travelling until she was 72, during which time she went on a remarkable series of journeys including the America, India, Kurdistand, the Persian Gulf, Iran, Tibet, Malaysia, Korea, Japan, China and Morocco. She was the first woman to be eleceted a fellow of the Royal Geographical Society.

4. Annie Smith Peck (1850 - 1935) - A mountaineer who climbed her last mountain at the age of 82, she caused outrage because she climbed in trousers rather than skirts. Annie broke mountain-climbing records and even planted a flag showing support for the Suffragist movement at the top of Mount Coropuna in Peru. She was the first to climb the north peak of Huascaran in Peru, which was eventually named after her.

5. Mary Kingsley (1862 -1900) - Kingsley started her travels at 30 years old and explored uncharted parts of West Africa alone - something completely unimaginable in her day. She was the first European to enter remote parts of Gabon and she championed the rights of indigineous people, opposing European Imperialism.

6. Gertrude Bell (1868 - 1926) - A determined and ambitious woman, Bell was the greatest mountaineer of her time as well as an archaelogist and writer.  She was the first woman to achieve seniority in the British military intelligence and diplomatic service, and played a major role in establishing and helping administer the modern state of Iraq, using her in-depth knowledge acquired through her travels.

7. Nellie Bly (1864 - 1922) - The American journalist set out to the beat the fictional Phileas Fogg's record and made it round the world in 72 days - 8 days faster than Mr. Fogg. When she initially suggested the idea to her newspaper editor, he was immediately on board, except that it would have to be a man to do it because a woman would need a chaperone and way too much luggage! Eventaully she managed to convince him and set off alone, with one small bag.

8. Bessie Coleman (1892 - 1926) - Bessie was the first black woman pilot in the world! This determined woman got her pilot's licence in France after teaching herself French as she was not allowed to attend flying scools in America. as a pilot she flew all over the US and performed aerial tricks.

9. Freya Stark (1893 -1993) - The Anglo-Italian explorer and writer travelled into remote areas of Turkey and the Middle East. She was one of the first non-Arabs to travel through the southern Arabian Desert and mapped uncharted areas of the Islamic world. She wrote over 24 books and continued travelling even as she grew older and unwell.

10. Lady Grace Drummond Hay - (1895 - 1946) - A British weathy widow, she was the first woman to travel around the world in a zeppelin. This journey launched her career both as a writer and aviation specialist, and was only the beginning of her travels. She wrote about her experiences as she travelled the world and was a foreign correspondent in Ethiiopia and China.

These exceptional and inspiring women went through great lengths to be able to explore different parts of the world, to experience difference cultures, to break down barriers and to challenge convention, confirming that the passion for travel and discovery is quite simply human nature.